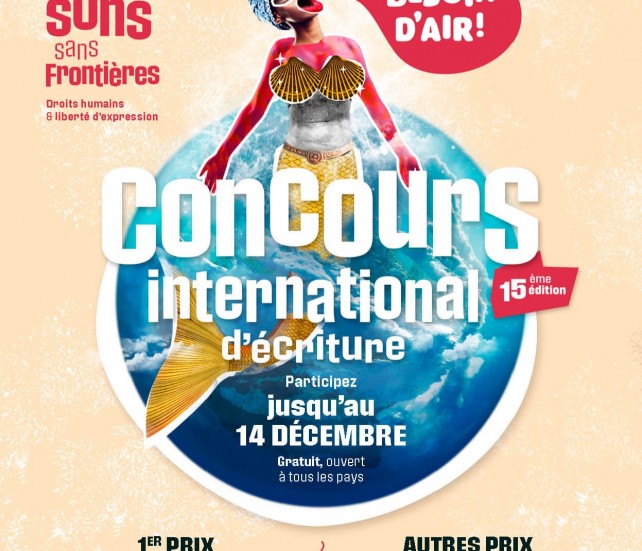 Songwriting Competition on Human Rights and Freedom of Expression themes

The Fusaca Association and Accord Production are organizing CHANSONS SANS FRONTIÈRES, a contest to write a song text in French on the theme: "Besoin d'air" (in French only).

The main objective of this contest (it's the 15th edition) is to allow participants to express themselves freely and in a dynamic of sharing, respect and openness, by writing a song text in French. This contest is also an opportunity to discover new talents of French-speaking songwriters. This contest is sponsored by the International Organization of the Francophonie. The deadline for participating is Monday 14 December 2020.

The rules are quite strict as only "persons who are not resident in France, with no limit of age , and who are not show business professionals (the candidate must have no ties with a recognized record company, have not made any sound recording that has been or is to be distributed for commercial purposes by a distribution company recognized regionally, nationally or internationally) may participate in this competition."

- The winner will win a one-week stay (fro 2 people) in France. The stay includes international and national transportation, visas, accommodation and meals. An official award ceremony is organized during this stay, requiring the presence of the winner.

- 2ndPrize (open to any person over 20 years old whose first or native language is not French): 500 euros

- Young Public Prize (open to under 20-year-olds whose first or mother tongue is not French): 300 euros. This prize is open to candidates under 20 years old.

- French as a mother tongue prize (open to participants over 20 years of age with at least one parent whose mother tongue is French): 150 euros.

- Young Audience Prize French as a mother tongue (open to under 20-year-olds with at least one parent whose mother tongue is French): 100 euros.

The mother tongue, also known as the native language or first language (versus foreign language), is the first language a person learns in early childhood, in other words, it is the language that is spoken to the child at home even before he or she learns to speak.